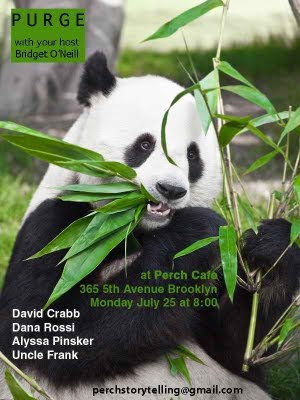 David Crabb is the co-producer of Kevin Allison’s RISK! and a producer/co-host of Ask Me Stories (www.askmestories.com) David is a member of Axis Theatre Company (www.axiscompany.org) and has appeared onstage in "A Glance at New York" (Edinburgh Fringe & NYC), "Down There" and the "Hospital" series. David is a multiple MothSlam winner and... is currently working on his one-person show "Bad Kid," set to open this November. www.davidcrabb.net

Dana Rossi is the creator and host of the Soundtrack Series, a night of stories based on songs that happens every month (like, say, this Thursday) at Le Poisson Rouge. She has written for NY Press, Time Out NY, The Retroist, and is a regular contributor to InDigest. An essay of hers will appear in the upcoming anthology Madonna & Me, which will be published by Soft Skull Press in March 2012.

Alyssa Pinsker is a writer, stand up comic, storyteller and teacher living in Brooklyn. {As the child of a Yeshiva fleeing Bronx bred dad and anti-religious Ukranian Catholic immigrant mom,she became a spiritual seeking world traveler who's dated hipster Hassids, turbaned Sikhs, skirt-wearing Keralite Muslims, WASPS and Jews all for "material". }She is currently working on an anti-Eat, Pray, Love memoir, and has written for the Huffington Post, Time Out NY, New York Post, The Daily News, Bust Magazine, The Frisky, The Forward, Generation J, and Interfaith Family. She has also appeared in the MOTH, How I learned series, Freerange non-fiction, the Franklin Park Reading series and New York Confidential,Standard Issues and more.

Cautionary Tale teller "Uncle Frank" of the Moth unleashes his alter ego one man Ed Sullivan Show for a comedic retro look at highlights from the 50's and 60's.

Your host, Bridget is recovering photographer turned writer and performer. She hails from Cheese steak County, otherwise known as Philadelphia, or Scrapple, PA. She performs regularly at The Moth, and other storytelling venues throughout NY. She studied at the UCB Theater. Her work has been published in publications and blogs. She is currently writing her humble, hilarious, no-holds-bar memoir highlighting her self- inflicted shenanigans from her early years.

Posted by Bridget ONeilll at 2:57 PM No comments: 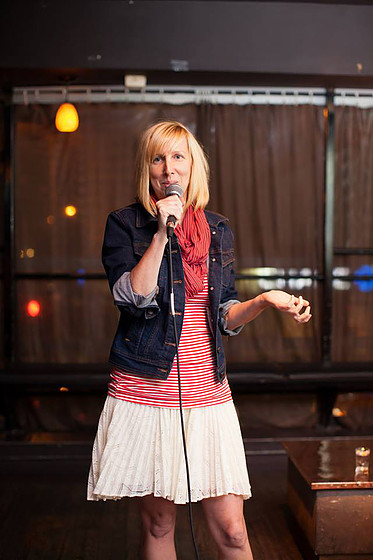 photographer + writer +storyteller. I hail from Cheese steak County, otherwise known as Philadelphia, or Scrapple, PA. I was schooled in San Francisco, and anchored New York.